1. Just back from two exhilarating weeks in India. Along with Harriet Vidyasagar, I visited with Sugar and OLPC aficionados in Delhi, Goa, Mumbai, and Guwahati. It was quite eye-opening. (Salil Konkar documented the trip in a slideshow on his blog.)

The first stop was Delhi. Harriet had arranged meetings with Sesame Street India, which is using Sugar in an after-school program. They were blown away when I told them the history of the Simple Graph program, one of their favorites. Then we went to JNU where I met with Dr. Ajith Kumar. Kumar works at the inter-university particle accelerator center, but is also the inventor of ExpEyes, a peripheral device similar to Arduino (or Lego WeDo) but for more serious EE work (it has a signal generator and a buffer for doing precise sampling of signals). Of course, I could not resist writing a Turtle Art plugin for his device.

I also attended a seminar on Digital Literacy sponsored by the Hindustan Times, Intel, and Microsoft. The seminar itself was pretty depressing: a very paternalistic approach to providing government services to the masses. But I met a number of good people there whom I will be following up with.

Also in Delhi, I got a chance to see Manusheel Gupta, who had interned for me in the very early days of OLPC. It was very nice to catch up.

The next stop was Goa, where there is a small OLPC deployment. One of the highlights of the trip was finally meeting Salil Konkar, who has been maintaining the deployment on a volunteer basis. There are not enough laptops for each child to get their own, so before each class, a selected group of students retrieve then (XO 1.0s) from a charging station (designed at the Homi Bhabha Centre) for use in the class. The students, perhaps seven to eight years old, were using the Numbers activity that day, and although it was somewhat of a traditional class in format--desks in rows facing forward--they were actively engaged and helping each other. I had a prototype of XO Touch with me, so I did a small study with some of the kids to see how they took to it. (Although it is unfair to compare with the erratic touchpad of the first-generation XO 1.0s, it was nonetheless obvious that touch will make a big difference: the interface, which had been getting in the way was suddenly in background; all focus was on the math.)

Another highlight in Goa was the opportunity to meet Rita Paes, who directs the Nirmala Institute, a teacher-training college. I got a chance to talk to the students about Sugar (who welcomed me with a lovely ceremony) and with Rita about the potential for establishing a center of excellence for teacher training to support our efforts in India. I saw great potential. Rita also introduced Harriet and me to some locals who have interest in helping with the localization of Sugar into Konkani. It was interesting to me that some people write Konkani using Latin script, while others use Devanagari script. It is somewhat of a political issue, so Chris Leonard has enabled both communities to work in pootle.

From there, I went to the University of Goa, where I gave a lecture to the engineering students. The next evening, I gave a seminar on how to write a Sugar activity to about seventy students. Clearly there is some latent interest in the project. I also have a lecture at the local meeting of the ACM, which happened to coincide with my visit. Finally, I travelled an hour out of town to the Goa Institute of Management, a beautiful campus on a hill top, to talk to the students on the theme of "learning to change the world." We discussed strategies for making Sugar (and OLPC) take hold on the Peninsula. (See Part 1, Part 2, and Part 3.)

From Goa I travelled to Mumbai, where I was hosted by the Homi Bhabha Centre for Science Education Tata Institute of Fundamental Research, specifically G Nagarjuna and his students at the Gnowledge Lab. G's students are well versed in Sugar, having been active in supporting the OLPC deployment in Khairat. Their principal project is metastudio.org, a peer-to-peer collaborative workspace that utilizes many semantic features. We discussed the possibility of folding some of their work into future School Server designs. Hopefully they will be able to participate (mostly likely on line) in the discussions at the SF summit.

From Mumbai, I visited two schools: a school for children with disabilities and the village school in Khairat. At the former, I discussed with the computer teacher the possibility of using Sugar instead of Microsoft Windows XP as a way to engage the children more directly. While Sugar is attractive from the learning perspective, one concern is that a good deal of the computer training is geared towards an exam that is based on mastery of Microsoft products, which is a hurdle the children must jump over in order to enter the job market. Of course, for most populations of learners, master one word processor means that one can quickly master any other, but it is still to be demonstrated that such a transfer would occur with this population.

At the school in Khairat, I got a chance to see what has sprouted from the seed that Carla Gomez Monroy planted four years ago. Khairat was one of the early OLPC deployments and, although the program has as yet to take off in India as a whole, this program is still going strong. Harriet and I were welcomed to the village with a traditional ceremony that included beautiful garlands of flowers. We sat with some of the mothers and preschool children, whom I immediately presented the XO Touch. The children took to it immediately. One child, using paint, kept looking at his finger for the ink. But the real fun was visiting the classroom. The children took turns standing in front of the class to talk about their work: often drawing, custom-made memory games, writing (in both English and Marathi--they are completely fluid in switching between scripts on the XO keyboard), and Turtle Art. I got to watch as a child figured out how to scale his drawings in Turtle Art. I got a chance to present to the class, so I thought I would engage them in something a bit different. Daniel Drake has written a yet-to-be-released activity that features some animated dance and exercise moves. I showed them some dances and they did not need prompting to follow along. But then I asked them to show me some of the local dance steps. I challenged them to make their own dance videos and coached them through the process using Turtle Art. They quickly grasped the concept behind the various media blocks (they had previously been using an old version of Turtle Art that did not yet have these features). Together we engaged in some "hard fun." 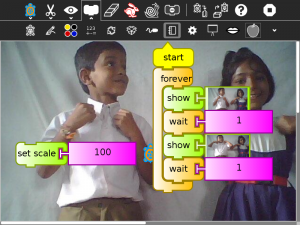 My next stop was IIT Guwahati. I gave the keynote at Techniche, the annual techno-management festival. Interestingly, as I was staying at the university guest house, I had a chance to interact with much of the staff, particularly in the kitchen (did I mention I love Indian food?). They were really taken with the XO and we discussed how we might get some for their children. As it turns out, the students at the IIT run a school for the children of the workers, so perhaps it is not out of the question.

I spent another 24 hours in Delhi. Harriet and I spent much of the day with Satyaakam Goswami and his students at JNU and members of the local FOSS community. In addition to being very active in helping to translate Sugar into Hindi, Satyaakam has been working in an urban school in Nithari, using Raspberry PI. I visited the school and only have admiration for the teachers and students who seem to be thriving despite very difficult circumstances. As with the school for the disabled, much of the emphasis in the school is for the children to pass their exams, so in discussion with the teachers, we talked about trying to establish some extra-curricular activities for the children using Sugar.

India opened my eyes both to the possibilities and the challenges of Sugar and OLPC. Many thanks to Harriet for her support. And to the numerous volunteers I met who are trying to give the opportunity of learning to so many children.

2. In response to feedback from FZT, I released a new version of the Nutrition activity. Also, in the spirit of eating my own dog food, as usual I gave my talks in India using Turtle Art. In the process, I uncovered some corner cases in some of the new features I had introduced in Version 154. Version 156 has some bug fixes.

3. I just got the galley back from the publisher of a book I am writing (with Chuck Kane), Learning to Change the World, about OLPC. I hope to do justice to the project.

4. There are plans to hold the next OLPC SF summit in San Francisco the weekend of October 19-21. We are looking into organizing a Sugar Camp following the summit.