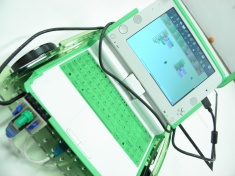 The XO laptop sits on a baseplate which also has 2 motors, sensors and a battery pack. The motors and sensors interface to the XO through a small PCB, either an Arduino Mega and shield or a Usb4butia PCB (which uses a PIC microprocessor). The connection between the XO laptop and the small PCB is by USB cable. The cable must stay connected while the program is running. 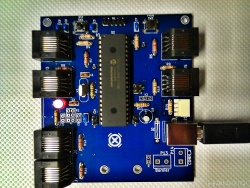