This is the outline that will be fleshed out in Turtle Art. 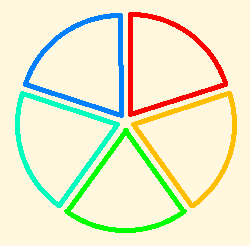 None of this requires Turtle Art. People have been learning fractions for thousands of years. You can cut pies or cakes or plots of land or the floor of the classroom or a tabletop or pieces of construction paper to do all of this. Oh, yes. How many pieces do the local pizza parlors cut pizzas of various sizes into? What fractions can you make from those pieces? Can you find pictures of pizzas from directly above, so that they appear as circles and you can print them and cut them up? (Yes.) What else? Craters on the moon? The whole moon? Circular swimming pools, fountains, ponds, coins, cups?

It remains an open question whether the children can discover the invert-and-multiply rule for dividing fractions by themselves in a sufficently rich environment, whether they will need broad hints, or whether they will have to be told. It would be interesting to me to hear how they would explain these ideas to each other. I will be interested to hear your results.