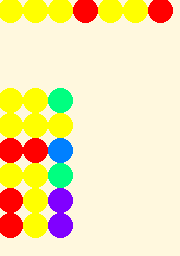 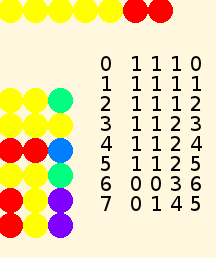 This Turing Machine is the simplest kind of adding machine. It starts, as in the first illustration, with two blocks of cells with a separator in between. The number of cells in each block is our input, which the user can change by editing the Setup action. The output will be a single block containing as many cells as the sum of the two input numbers. It will do this by replacing the separator with the color of the number blocks, and erasing one number cell at the end of the second block, giving a configuration as in the second illustration for its result. This model Turing Machine also logs each of its actions in a table, described below.

This table starts counting at 1. In programming it is often more convenient to start counting at 0. You will see examples of this practice if you examine the code for this Turing Machine.

In addition to the essential workings of the Turing Machine, this program logs each step in the process on the screen, showing the numerical values of the step, symbol, move, state, and cell on each pass. Students are encouraged to run the program in step mode (Turtle or Bug), watching the process unfold.