The Saint-Ouen deployment started in 2014 with the deployment of 25 XO-4 at the Mendela school by OLPC France/Eduvelopers. 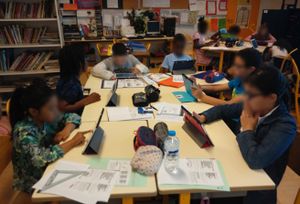 Children playing with Sugarizer in Mendela school at Saint-Ouen

Considering the positive feedbacks of teachers on field and its wish to deploy Android tablets in schools, the Saint-Ouen city decided in 2018 to launch a large deployment of Sugarizer in schools.

A partnership was set between Saint-Ouen city, the Inspection Academique (depending of French minister of education) and OLPC France/Eduvelopers.

The first phase of deployment has started in 2019 with a deployment in 3 schools: Mendela, PEF and Petit-Prince. It means about 50 class and 1000 children.

Three training sessions animated by IT team from Saint-Ouen city and OLPC France/Eduvelopers was planned between March and May with teachers of each school. 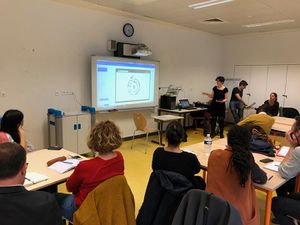 Tablets deployed are Samsung Galaxy Tab A 2018. Each schools received 2 chariots with 27 tablets in each and a WiFi . Each school is connected to a broadband internet connection.

Sugarizer OS is deployed on each tablets with about 20 android application launchable from Sugarizer OS.

Sugarizer Server is deployed on the infrastructure of city using Docker. 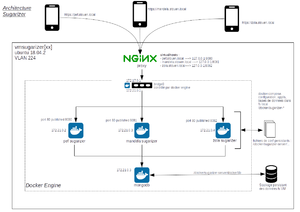 The second phase of deployment has started in september 2019 witch is a deployment in 5 new schools: Frédéric Joliot Curie, Irène Joliot Curie, Jules Michelet, Victor Hugo and La Fontaine. It means about 50 new class and about 1100 new children.

About 480 Sugarizer OS tablets was deployed between phase 1 and phase 2.

The second session is planned during Q2 2020 and will be dedicated to listen teacher feedbacks.

The third phase of deployment is planned in 2nd semester 2020. The objective is to deploy the 5 leaving schools in the city: means about 1500 new children et 300 new tablets.

All schools in the city should be deployed at the end of 2020.