Q2: What is your email address?

Q3: What is your Sugar Labs wiki username?

Q4: What is your IRC nickname?

Q5: What is your primary language? (We have mentors who speak multiple languages and can match you with one of them if you'd prefer.)

Q6: Where are you located, and what hours do you tend to work? (We also try to match mentors by general time zone if possible.)

Q1: What is the name of your project?

Q2: Describe your project in 10-20 sentences. What are you making? Who are you making it for, and why do they need it? What technologies (programming languages, etc.) will you be using?

This project aims at introducing speech as an alternative to typing as a system-wide mode of input.

I have been working towards achieving this goal for the past 6 months. The task can be accomplished by breaking the problem into the following smaller subsets and tackling them one by one:

The above mentioned goals are very long term goals and some of those will need active participation from the community. I have already made progress with Steps 1 and 6 (these are continuous tasks in the background to help improve the accuracy).

My deliverables for this Summer of Code are:

I. The Speech Service:

The speech service will be a daemon running in the background that enables speech recognition. This daemon can be activated by the user. When activated, a toggle switch appears on the sugar frame. A user can 'start' and 'stop' speech recognition via a hotkey(s)/toggle button. When in 'on' mode, this daemon will transfer the audio to Julius Speech Engine and will process its output to generate a stream of keystrokes ("hello" as "h" "e" "l" "l" "o" etc.) which are passed as input to other activities. Also the generated text data can be any Unicode character or text and will not be restricted to XKeyEvent data of X11 (helps in foreign languages). When in command mode, the input will be matched against a set of pre-decided commands and the corresponding event will be generated.

In this mode, the users speech will be recognized and the corresponding keystrokes will be sent as is. This can be done via simple calls to the X11 Server. Here is a snippet of how that can be done.

The above code will send one character to the window. This can be looped to generate a continuous stream (An even nicer way to do this would be set a timer delay to make it look like a typed stream).

Similarly, a whole host of events can be catered to using the X11 Input Server. Words like "Close" etc (which will be defined in a list of commands that the engine will recognize) need not be parsed and broken into letters and can just be sent as events like XCloseDisplay().

Note 1: Sayamindu has pointed me to XTEST extension as well which seems to be the easier way. I'll do some research on that and write back my findings in this section. It has useful routines like XTestFakeKeyEvent, XTestFakeButtonEvent, etc which will make life more easier in this task.

Note 2: Bemasc suggested I include the single character recognition (voice typing) in command mode by treating letters as commands to type out the letters and have the dictation mode exclusively for word dictation to avoid ambiguity in dictation mode for words like tee, bee etc.

All of this basically needs to be wrapped in a single service that can run in the background. That service can be implemented as a Sugar Feature that enables starting and stopping of this service.

This approach will simplify quite a few aspects and will be efficient.

Firstly, speech recognition is a very CPU consuming process. In the above approach the Speech Engine need not run all the time. Only when required it'll be initiated. Julius speech engine can perform real-time recognition with up to a 60,000 word vocabulary. So that will not be a problem.

Secondly, need of DBUS is eliminated as all of this can be done by generating X11 events and communication with Julius can be done simply by executing the process within the program itself and reading off the output.

Thirdly, since this is just a service any activity can use this and not worry about changing their code and importing a library. The speech daemon becomes just another keyboard albeit, a virtual one.

Once this is done it can be tested on any activity (say Listen and Spell) to demonstrate its use.

II. Make a recording tool/activity so Users can use it to make their own language models and improve it for their own needs:

This tool will help users in creating new Dictionary Based Language Models. They can use this to create language models in their own language and further extend the abilities of the service by training the Speech Recognition Engine.

The tool will have an interface similar to the one shown in the screenshot at http://wiki.laptop.org/go/Speech_to_Text (this was built in Qt and was a very simple tool). Our tool will of course follow the Sugar UI look-n-feel as it will be an activity built in PyGTK. It'll have a language model browser/manager and will allow modification of existing models. Users can type in the words, define their pronunciations and record the samples all within the tool itself.

The recording will be done via arecord and aplay which are good enough for recording Speech Samples.

I will be using (and have been using) Julius as the speech recognition tool. Julius is suited for both dictation (continuous speech recognition) and command and control. A grammar-based recognition parser named "Julian" is integrated into Julius which is modified to use hand-designed DFA grammar as a language model. And hence it is suited for voice command system of small vocabulary, or various spoken dialog system tasks.

The coding will be done in C, shell scripts and Python and recording will be done on an external computer and the compiled model will be stored on the XO. I own an XO because of my previous efforts and hence I plan to work natively on it and test the performance real time.

The recording utility will be implemented using PyGTK for UI and aplay and arecord for play and record commands.

Q3: What is the timeline for development of your project? The Summer of Code work period is 7 weeks long, May 23 - August 10; tell us what you will be working on each week.

Q4: Convince us, in 5-15 sentences, that you will be able to successfully complete your project in the timeline you have described.

Ans: I have been working on speech recognition for XO since November last year. My research has helped me understand the requirements on this project. I have made some progress as shown in http://wiki.laptop.org/go/Speech_to_Text which will help me in this project. I am also familiar with the development environment.

Apart from this, I have worked on a few real life projects ( some open source as mentioned above and an Internship in HCL Infosystems) including one GSoC project for Fedora which has taught me how to work within the stipulated time frame and accomplish the task.

Ans: Benefits of this project

The completion of this project would mean sugar has an input method which is more:

I see the benefits as follows:

Speech recognition, as described in this proposal, would make Sugar more effective both directly and indirectly.

Q2: Sugar Labs will be working to set up a small (5-30 unit) Sugar pilot near each student project that is accepted to GSoC so that you can immediately see how your work affects children in a deployment. We will make arrangements to either supply or find all the equipment needed. Do you have any ideas on where you would like your deployment to be, who you would like to be involved, and how we can help you and the community in your area begin it?

Ans: A community school in my neighborhood. That would be my ideal choice as they would really benefit from it apart from helping me test out my project. I am sure they'll be delighted to be a part of this program. I was fortunate enough to go to a private school and I realize that children who are already playing at their PCs at home and computer labs at school might not be very appreciative of what we are trying to achieve.

Q3: What will you do if you get stuck on your project and your mentor isn't around?

Ans: Even with my mentor around, I will try to first find a solution myself without expecting any spoon feeding, though I will let him/her know where I am stuck and what am I doing to find a solution. If I am not able to solve the problem, then I will ask my mentor for help.

If my mentor is not around,

Q3: How do you propose you will be keeping the community informed of your progress and any problems or questions you might have over the course of the project?

Ans: I will maintain this page and keep it updated of the status. I'll also mail the Summer of Code specific mailing list of Sugar with weekly updates. 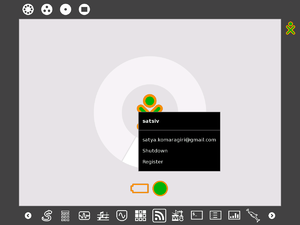 Q1. We want to make sure that you can set up a development environment before the summer starts. Please send us a link to a screenshot of your Sugar development environment with the following modification: when you hover over the XO-person icon in the middle of Home view, the drop-down text should have your email in place of "Restart."

Q2. What is your t-shirt size? (Yes, we know Google asks for this already; humor us.)

Q3. Describe a great learning experience you had as a child.

Ans: My mother tongue is Telugu and I was born and brought up in New Delhi where Hindi is the local language. This communication gap made me struggle in school in my Nursery and Prep classes when the kids are not very good with English. My nursery teacher Mrs. Sengupta noticed that I used to be alone and would come and play with me often. I used to talk to her in Telugu and even though she never really understood what I am saying, she always listened and nodded. Gradually, I learnt Hindi too and was able to interact with everyone but that initial phase when my teacher had been so sweet left a lasting impact. All my school life, I was never afraid to go up to them and ask them a lot of questions. In retrospect, I realize how much I would have bothered them with my silly doubts but thankfully, they were all very good to me and even taught me a lot of stuff beyond the curriculum. This also gave me the aptitude to learn new languages much more quickly.