From Sugar Labs
< User:Inkyfingers
Jump to navigation Jump to search

I have seen this behaviour several times in Debian, I now have it reproduceable in two instances. Previous instances have been fixed or ameliorated by adding further packages in a haphazard way till the problem is eliminated.

These two instances have in common that Debian installer has not been used.

Similar behaviour (different cause - GTK3) is described with a fix here: Community/Distributions/Debian#GTK3_in_Debian_Testing

As this seems to me to be a hurdle to Debian users, I am asking for help in resolving:

One variant of Sugar launches with errors, while trying another variant in the same environment results in invisible icons,

Is this a symptom of either, partially installed, or partially accessible libraries. If so which libraries and why?

The login manager is SLiM and desktop environment Openbox. A fresh install of Debian Squeeze with Sugar installed from Debian repos, via Synaptic, sugar-0.88, sugar-session-0.88, and sucrose-0.88

To display frame requires impossibly accurate positioning of cursor in corner, or Frame, Activation-Delay, Edge-to-instantaneous in settings. All tested Activities have worked except Turtle Art, Etoys and Write.

This is a fresh install - I am (fairly) confident all Activities could be got working eventually - this is not the issue.

A screen shot cannot be taken.Pressing Alt changes the screen (in a manner similar to "reverse selection") 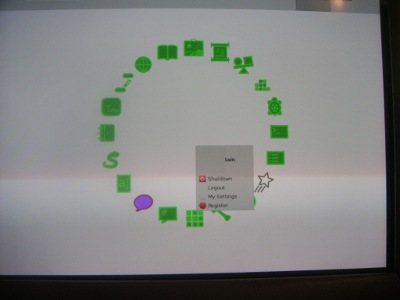 Mostly, any-one-activity will start. A non-Sugar cursor is now present.

Many text-box-to-replace-icons are invisible or show black-on-very-dark-grey. Several Activities tested, within limitations of above, the Activity starts to function. "Activity title" may not be edited. Clicking on stop icon causes sugar-session to hang. Cannot restore session, but in console killall python, closes the session without further error.

librsvg2-2 is already the newest version.

python-gobject is already the newest version.

lxappearance is already the newest version.

There is no login manager (startx) desktop is LXDE. A new install of sweets on a Raspberry pi

2. "Polkit authentication doesn't work with xdm display manager, use gdm3, at least, instead."

I have no display manager so I installed Package: gir1.2-polkit-1.0

However I do not yet know if this is an adequate solution for Polkit authentication.

I have a 70% working result, but without good two-way communication with source.

There are notes on this partially successful, unfinished job here:Talk:Sugar Creation Kit/sck/Advanced Topics

while much less successful launch command:

Produces all the symptoms mentioned in first instance, only worse.