Please add your logo ideas to the image gallery.

Sugar Logo based on Activity Icons

Goal: simple, reproduces well at large or very small sizes (down to favicon), building on familiarity of previous logo yet emphasizing Activities that draw kids in -- chatting, TamTam, art - to give a playful feel. Intention: to be accessible and memorable to both kids and adults, building on previous brand equity, as well as saying what Sugar "is". Animated version could rotate through various activity icons.

Question: should the Sugar Labs logo and Sugar OS logo be one and the same? Perhaps Sugar Labs should have a separate logo, in order to allow for variants on OS, and other projects. 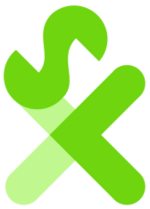 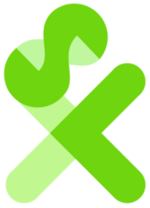 I have the SVG source available if either of these logos is selected. The second has the allusion of an infinity symbol and has a bit smoother look.

I got this from the upper left hand corner of the wiki site. It is optimized for a black background - sorry. But I really like this since it is slightly different from the XO logo - by being thicker and having a hard candy pattern. It's my favorite from the list so far.--ThePlaz 17:16, 26 May 2008 (UTC)

I like this a lot because it leverages the brand awareness of the OLPC XO and also suggests the physical nature of the substance sugar. - Docdtv

Individual grains of sugar fill the bowl. Attempting to be whimsical in use of color and simple in form. The font is Bentwood. 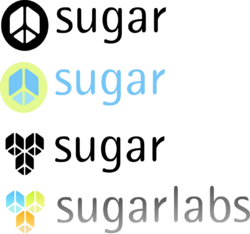 This logo variation is an axonometric sugar cube with the name sugar labs wrapping around the base. The name is set in Tempo heavy Condensed.

Here's a derivative idea, based on the "Sugar cube" proposal from before. If we consider representing Sugar as a building block, we could treat Sugar Labs as community structure composed of those blocks, emphasizing both construction(ism) and collaboration. Please note that this is a really quick sketch, and details such as size, placement, color, font, and even the rendition of the cube should be considered in detail, if this direction seems worth exploring.

Inspired by eben's building blocks. A "to-the-point" design. Have sugar be spelled using letter blocks. It immediately conveys the "kids learning" purpose of Sugar, plus hints at the enjoyment that goes along with learning. Rough mockup to show the idea.

I think the extant "building blocks" ideas already suggested are a great start!

But consider taking something LIKE the following image of sugar cubes...

...and then replacing SOME of the cubes with COLORFUL, WOODEN building blocks which are "unnaturally" the SAME SIZE as the sugar cubes. The choice and position of the letters used on the blocks are important. Ones to consider include O, L, P, C and X, O and L, A, B. S. - Docdtv

A connected community of learners 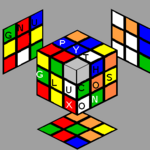 I like the cube idea, I was inspired looking at the earlier Sugar Cube designs and wanted to build something. My ideal is to connect a lot of parts, LEGO-style. So I adapted a Rubics cube design to build an apartment community with the Python team, the Sugar team, and so forth. Please choose and letter your sides, something wonderful could happen.

You could use this to document software/API layers, or anything that could be boxed, the dBus and other system software would be helpful to visualize, as well as children in different area using the mesh networking.

The colors and line weights need adjusting, but just to give an idea. It is simple and flexible and it intends to give the impression of multiple elements making a whole--in this case a word.

Christian's take on this theme

I considered trying something different. Our eyes are the organs we humans absorb the most information with, especially when using a computer. Also, Sugar Labs may represent an eye for its users gathering information from all over the world. This metaphor was also incorporated in the rest of the suite, while each logo incorporates the function/tool it represents in a metaphorical way. An other thing that was taken into consideration is that the Sugar Labs logo can be recognized/memorized easily and additionally it is functional in some cases on its own, without the need of the "Sugar Labs" badge. Hope this helps 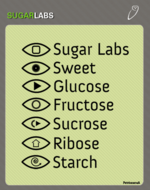 I had taken a crack at a similar idea myself, when working with the "droplet of sugar" idea.

Working atop of your image, I came with that result. To me, the thing should be green like the laptop (until XOXO) and I added a bit of sugar, or at least tried to represent some kind of sugarized treat with a cherry.

Just to give idea about logo based on "Sugarcane" image with SUGAR painted on it, and pieces of Sugarcane making "LABS" structure 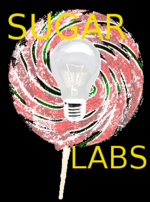 Here are various attempts using this theme: (Note, this is a mascot and not a logo) 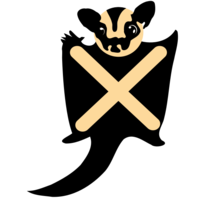 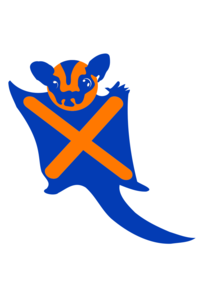 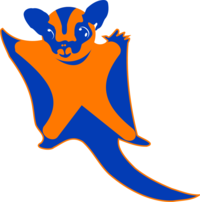 I think this may be both "appeal to children" and "call up childlike images in the minds of adults" - just saying that most of us are not exactly in our target user base. ;) Mchua 03:00, 18 January 2009 (UTC)

Here is a suggestion:

Inspired by Greg, Caroline, and "The Starfish and the Spider." Also somewhat boring and generic. 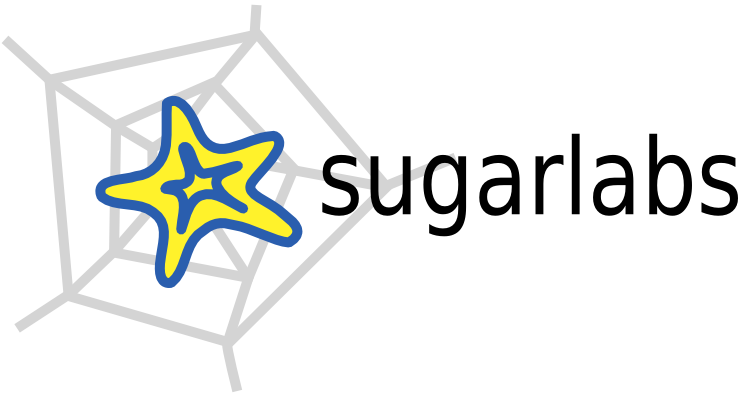 Somewhat boring and generic, but acorns are often a symbol for youth, trees a symbol of knowledge.

Dandelions sprout just about everywhere. Their flowers and seeds are often played with (and spread by) young children. They are also native to temperate areas of the northern hemisphere.

A dandelion seed in flight, one of billions off to explore the world and find a place to grow... 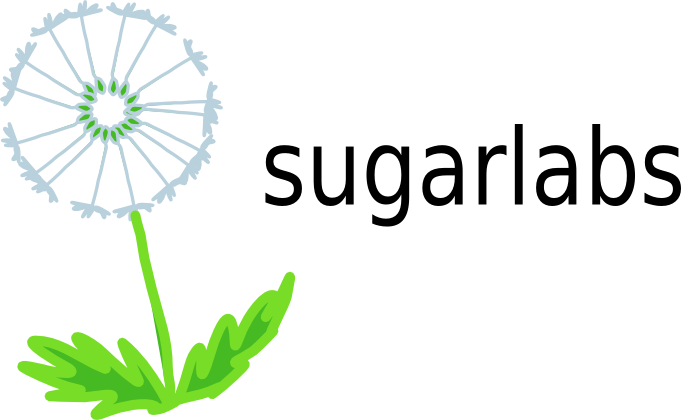 A dandelion head ready to be picked up and blown on by a child.
Retrieved from "https://wiki.sugarlabs.org/index.php?title=Design_Team/Logo_Ideas&oldid=42881"
Categories: