1. I've spent much of the week working on Turtle Art. At the urging of Cynthia Solomon, I decided to make some visual changes to some of the blocks, in an effort to make it a bit easier to follow program flow. To that end, I changed the way the flow block works. For example, the Repeat block had an overhang to the right below which you could stack blocks that would be repeated. Once the repeating was complete, flow continued on to blocks attached to the bottom of the repeat block. I've often seen people confused by this: they have been uncertain where to attach the blocks to repeat and have had to use vertical-spacer blocks to make their programs less cluttered. In the new look, the Repeat block has a clamp (or jaws) that surround the blocks to repeat and it auto-expands, eliminating the need to use vertical-spacer blocks. In this case, a picture is worth a thousand words. In addition to Repeat, there are new blocks for Forever, If-then, If-then-else, While, Until, and, from the Extras palette, the Collapse block. The latter is useful for collapsing a large stack of blocks into a single brick. 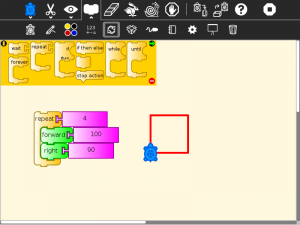 2. Stephen Jacobs sent a pointer to the projects his students at RIT have done this year:

3. I had blogged about a meeting with Teemu Leinonen from Alto University last week and had mentioned that I was working on a new activity inspired by TeamUp. The beta version of Bulletin Board is ready for testing. It is quite simple: think of it as Portfolio shared among multiple users. Starred entries in your Journal are shared, along with an audio recording.

4. Danishka Navin reports from Sri Lanka that next month, another remote school will be running Sugar on Hanthana Linux.

5. Meanwhile, Sameer Verma has been having some adventures on the sub-continent.

6. Hilaire Fernandes of DrGeo fame shared a cool video of some of the things you can do. Worth checking out.

7. Daniel Narvaez announced that he has released a new sugar-build that should make it pretty easy to build Sugar on most GNU/Linux systems (tested on the latest Fedora and Ubuntu systems).