1. Bradley and Tony have ask us for a summary of Sugar Labs activity for the Software Freedom Conservancy annual report. It has been a busy year, with tremendous progress on the technical front, but also real inroads into better understanding of how to deploy Sugar in a wide variety of contexts.

GTK-3
The major technical effort over the past twelve months has been the transition to GNOME Toolkit 3. The developer team, lead by Simon Schampijer, has migrated Sugar to GTK-3 and, in the process, both made Sugar easier to maintain and also easier to support on devices such as the OLPC XO 4.0 Touch. This has been a community effort with contributions coming from engineers at OLPC, Activity Central, and the Sugar community at large.

Sugar Activities
Our "app store" continues to grow, thanks in large part to contributions from Sugar users who have made the transition to Sugar developers. More than 10% of our apps were written by children who grew up with Sugar. Meanwhile, we are approaching eight-million downloads.

The next generation of hackers
Not only are Sugar users becoming Sugar activity developers, they are also beginning to work on Sugar itself. A large part of the effort to migrate Sugar activities to GTK-3 has been accomplished by youths; and these same young hackers are submitting patches to the Sugar toolkit as well. They are full-fledge members of our community.

Internationalization push
Chris Leonard has led an effort to recruit and assist translation teams so that Sugar has better coverage in the mother tongues and indigenous languages of our users. Over the past twelve months, we have seen substantive progress in the languages of:

These efforts have often included working with the local experts to establish glibc locales for their languages, which will facilitate further localization work on any Linux-based system.

Sugar in the USA
While the majority of Sugar users are in Latin America and Africa, we are starting to make in roads into the United States. Programs like the ones led by Gerald Ardito have demonstrated the efficacy of Sugar within the US educational market. Larger-scale efforts by OLPC in Miami and Charlotte are driving growth.

Teacher communities
Teachers are forming communities around Sugar to provide mutual support and to drive further pedagogical developments. They are using social media tools to form communities in which teachers and developers discuss problems and opportunities. Amazonas, Australia, et al. are leading the way.

Local initiatives
We have backed down from our formal "local labs" initiative, but not from working locally. There are strong local support teams in Uruguay, Argentina, Peru, etc., working on extending Sugar to support local needs.

Sugar on a Stick
There have been more than 500,000 visits to the Sugar on a Stick page (a version of Sugar that will run on any x86-based computer that can boot from a USB stick).

GNU/Linux distributions
Thomas Gilliard compiled a list of distributions that have seen significant advances in the past year.

2. Isabelle Duston has created a database of images (http://www.art4apps.org/) that is intended to reduce the cost of creating educational apps in particular for literacy. Feel free to use these images in your Sugar activities and to contribute to the database. She is also launching an App Challenge (See www.educationappsforall.org); Sugar activities qualify.

3. Edgar Quispe has finished 100% of Aymara for Fructose, a major step in supporting local languages in Peru. Quechua is also making rapid progress.

4. There are plans to hold the next OLPC SF summit in San Francisco the weekend of October 19-21. We are holding a Sugar Camp following the summit (Oct 22-24). Please register at [1].

5. Simon Schampijer announced the "I am a GTK+ 3 shell" release of Sugar and the Sugar toolkit (See http://download.sugarlabs.org/sources/sucrose/glucose/sugar/sugar-0.97.3.tar.bz2).

6. Daniel Drake announced that a new 13.1.0 development build is available (This one comes with the first development release of the GTK-3 port of Sugar and probably a fair number of bugs for you to help us find and solve.) See http://wiki.laptop.org/go/13.1.0

7. Thomas Gilliard reports at there is a new live CD of Sugar on openSUSE available that incorporates 0.96.2, the current "stable" version of Sugar. (OpenSUSE#openSUSE_12.2-sugar_0.96.2, iso)

On Monday, September 10, I became a grandfather. Looking forward to some Turtle Blocks fun with Theo Max in a few years. 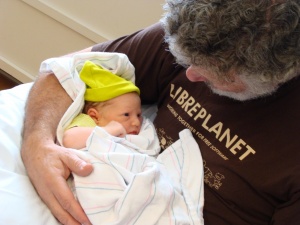