Between October 31 and November 5, in the context of the Turte Art Day, several workshops had been made to share experiences and ideas about the didactical use of TurtleArt, between different actors of the Uruguayan educational community. 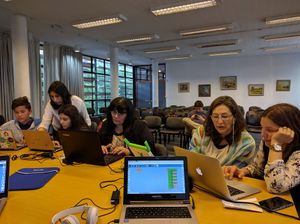 Some of the workshops shown different possibilities for connecting the computer with the real world via sensors, music and robots, many others where given by students showing hacks they had made specially using robots combining different kits or adding new parts that doesn't exist in the former kit to create new uses.

A new version of the turtleBlocks plugin Xevents, was presented showing the possibility to create tech tools that enhance computing for people with disabilities by a workshop given. 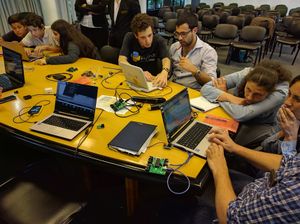 The workshops take place along the country not only in the capital, Montevideo, but also in other cities and locations like Florida, Maldonado, Treinta y Tres and Artigas where local actors propose the topics of each activity.

The local event was coordinated by Tecnología Educativa of Codicen, and the local activities where proposed by teacher of ANEP, Centros Mec, and the Faculty of Engineering of the Universidad de la República.

More Pictures of the event