My Sugar experience began with a OLPC internship and Summer of Code project in July-September 2007. I worked with smithbone, cjb, mitch, arjs and wad on the XO hardware. I also learnt python thanks to coderanger and mstone, Forth thanks to mitch, and linux c programming thanks to bernie. My work is in git - most of it consists of small standalone scripts, but a notable part was the power measuring work went on to be integrated in cjb's tinderbox.

I have interests in facilitating Sugar deployments locally. Part of this is making both teachers and FOSS people aware of the project, and encouraging them to contribute. There is no lack of energy or enthusiasm for the opportunity that Sugar presents, but there needs to be obvious, open, paths for involvement from any direction.

I spend most of my time studying for my Bachelor of Electrical Engineering in Computer Systems at the University of Adelaide, and working as a software engineer at ASTC (Australian Semiconductor Technology Company).

I've been helping Bill Kerr[1], a teacher at a local school who have been trialling Sugar in the classroom, using Live images on USB keys. The Live-USB method allows them to use a slightly-dated lab full of Dell machines that normally run Windows XP to run Sugar, without having to get the school sysadmin involved.

The class has been using first a 650-based build, and more recently a 0.82 release of Sugar for a semester. They have maintained a wiki[2] on the topic.

I'm slowly developing my public speaking skills by giving talks to groups - teachers, hackers, uni and highschool students - initially about OLPC, but now about Sugar in it's many forms.

A list of the formal talks I've done, for my own record 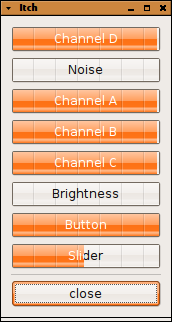 Thanks to Roland Gesthuizen[12], a teacher who I met while giving a talk on OLPC, I came into possession of a Scratch Board - now named Pico Board. It's a small serial based breakout board, with a bunch of sensor inputs. I've hacked together some python to read this data out and display it. This has evolved into an activity for the XO.

I would like to see this become integrated with Arjun's sensor work in Measure and Turtle Art. Perhaps next would be turning the python into a library suitable for using the sensor data in these programs, and/or Pippy.