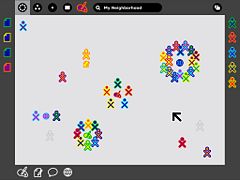 On the laptops, the clipboard takes the form of the left-hand edge of the frame. This region serves as temporary storage for objects - a paper, an image, a sentence, a URL - facilitating their transfer among activities and, perhaps more importantly, among the various zoom levels. Any type of object that can be stored in the Journal can likewise be transported via the clipboard. A child may place an object on the clipboard in a couple of convenient ways. First, keyboard shortcuts will provide an interface for simple copy and paste functions in the way already familiar to us. Additionally, since objects support direct manipulation, the child may simply drag a photo, file, or selection onto the frame in order to copy it, and may then drag it out to paste it in another location, such as within another activity, on a friend, or to a Bulletin Board. As items are placed on the clipboard, they are arranged temporally in a push-down stack, the most recent clipping appearing in the upper-lefthand corner of the frame.

With the presence of a clipboard which contains multiple items, it becomes necessary to add a means for selecting an active clipping as the source for any paste command. Since the usual copy/paste keystrokes will quickly become familiar to all, any invocation of the copy shortcut will automatically place the resulting clipping at the top of the stack, selecting it as the source, so that a subsequent paste command behaves as expected. When not using these traditional shortcuts, a single click on any object in the clipboard will select it, visibly indicating it as the new source. Additional copy commands (or drags) will continue to add elements to the clipboard stack. Once the clipboard reaches a predefined limit, the elements at the bottom of the stack will begin to drop off making room for the new ones. Elements may also be removed explicitly by the user via their contextual rollover, and a modified paste shortcut for advanced users will serve to both paste an item and pop it from the stack at the same time.

The resulting clipboard will behave identically to those on current operating systems, while at the same time providing drag and drop support, clipboard history, and previews, as well as advanced functionality for advanced users.