My experience with open source has typically been that of a consumer, Most of the open source projects I have were small pet projects from early high school, before things got busy. Now that I'm attending college (at the University of Utah) my interest in open source has been re-ignited, I have a little bit more time and freedom to code as I please and contributing to a project like sugar would be extremely cool (Our family actually has one of the original XO laptops purchased when they were first made available, we moved a little while ago, it's probably still out in our garage somewhere). I chose XO as one of my organizations because beyond being able to productively code for a summer, I have experience with the XO laptops,

Having a strong background in git (my old testbed where all of my code went is at github.com/alexhairyman/ unfortunately it has not been contributed to in a long time as high school and a job took over my free time), I would love to implement the Git backend for sugar journal. Essentially I would want to modify sugar journal's code to essentially propagate all changes as a commit to a local repository. The end goal would be to wrap up git with a UI to explore all previous changes, each commit would contain a metadata file generated by either the datastore or the journal source code, and then perhaps a binary file containing the content too. This would update a locally stored git repository, which would then propagate changes to any one of the git hosting sites out there (github has a nice python API to facilitate using github specific features). One way of doing it could be store all of the binary/large data to google drive, the API available for drive would make it easy to store data in an existing drive setup. Instead of using git at all, having a metadata file keep track of the journal entries would allow the computer to just interact with google, and expanding storage for google drive is ridiculously cheap. This would be the first discussion I have with my mentor

Impact on the Community

Me: Having the journal be propagated to the cloud will allow someone to switch between devices. Allowing someone to make changes at both school and home will make it easier

to switch between devices and eventually upgrade to bigger hardware. It will essentially be the fostering from the environment that is sugar to windows, OS X, Linux, etc. Besides that, hardware fails, and being able to rebound from that is a

Walter: Above and beyond the expanded functionality we have the opportunity to introduce our users to some of the core concepts behind modern FOSS development. Win/win. 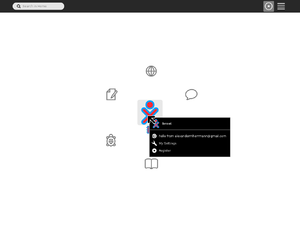 Experience as a child:

My dad has always pushed for me to do GSOC, not because he was an overbearing father, but because he saw my potential. I started programming in middle school and have always just been so blown away by the limitless possibility of code.