Summer of Code/2014/Proposal to port sugar core to python3

Proposal to port the Sugar core to Python 3

I speak Tamil primarily, But I'm perfectly comfortable with English.

I'm comfortable with SCM using git and proficient with Python, Ruby and C. I'm also familiar with the MVC web-frameworks django and ruby on rails. But to be honest, I have been mostly learning and fiddling around with things up until now and never really done any proper projects or made any real contributions to open-source projects. You can check out bits of my experimental code on github. But I plan on porting a dependency, telepathy-python to demonstrate that I'm capable of handling the project. I see GSoC as a wonderful opportunity to become part of a community, contribute and also learn something valuable.

For sugar to be future ready, it's core has to be compatible with python 3.x . Python 2.7+ would also need to be supported for existing activities to run without a hitch. This would represent developers who prefer python 3 as well as those who prefer python 2.7+ to be able to contribute to sugar.

One approach would be to sort out python 3 support for all the dependencies, and then run 2to3 on the core code as a cronjob and provide a wrap around script that would handle both python 2.7+ and 3 activities. But maintaining the code could turn messy real quick. Fixing a python 3 specific bug with this kind of a setup would be really complicated.

My plan of action is to have a single, easy to maintain codebase that can run on python versions 2.7 through to 3.3. Towards this end, I would automate tests to run across python2.7 - 3.3 with tox or a similar tool first, and then write polyglot code with six incrementally.

I grepped for imports on both sugar and sugar-toolkit-gtk3. A few of the modules have been renamed/relocated in python 3, but all of them are available, except for telepathy-python which as I have already said, I will be porting in the coming week.

would import configparser, htmlparser and xmlrpc client in both python 2 and 3(These are some of the modules used by Sugar that I found were relocated in python 3). Of course just try, except blocks will work just the same, but that code would just feel hacky and ugly. Not to mention that six provides a whole host of other features like syntax compatibility and is not limited to just wrapping around relocated libraries.

My project would infact introduce no new features at all, but it would make Sugar future ready and also backwards compatible. It might actually make development/maintenance harder on the core libraries in the short term, because the developers would need to understand the polyglot written using six or ad-hoc polyglot. But it would provide long-term benefits and a wider potential future developer reach. This issue I believe can be circumvented by writing proper documentation which I plan to do towards the end of the project.

By this time, I plan to have finished writing polyglot for sugar and sugar-toolkit-gtk3 and have an automatic cross version testing setup in both of these.

June 23 - August 11(Second half of the official coding period)

Deliverables at the end of GSoC

Post GSoC, I would be available to help port activities and sugar-buildbot to python 3.x and also write a porting guide for activities for developers.

Why I think I can complete this project successfully

I don't have any open-source contributions that I can reference here, but I did a wordpress site for my I believe in the cliche about actions speaking louder than words, so I plan on porting telepathy-python to python3 in the coming week, So I can show that I'm committed and capable of undertaking this project. I strongly feel for Sugar and want to contribute to it one way or another, so much so I would be interested in doing so regardless of whether I get into GSoC.

Me and the community

Impact of the project

At the end of my project, the testing on the Sugar toolkit and the Sugar core would have improved greatly and I strongly believe that a robust set of unit tests is a must for every project. Python 3 has better unicode support and I think a lot of activities based around text would greatly benefit from porting to python 3.

There are several reasons why this project is important to Sugar Labs: (1) we need to keep pace with the projects we depend upon upstream -- Python 3 is being to become de rigour -- and (2) Python 3 has much better support for i18n and unicode -- critical to the global nature of our project. --Walter (talk) 13:38, 20 March 2014 (EDT)

First there's the Sugar Labs community, I'm sure there will always be someone around on the mailing list or the IRC who are willing to help. Then there's always the internet, which is an amazing resource. So much so that I could say that half the things I've learnt in my life have been through the Internet. Sites like stack-overflow have a very diverse community that is always willing to offer help. If none of it works out, I would try working on a different part of the project until my mentor is available or I find a proper solution.

I plan on writing a report every week on my blog and also discuss with people regularly over the mailing list or the IRC channel. I might also write articles about six and the approaches I use to write polyglot so I can keep the developers in the know of what I'm doing. This could also serve as documentation for when somebody is looking to add to the Sugar core/toolkit or simply fix a bug in the future.

I've been able to setup the development environment and here's the screenshot of it with the suggested modification of my email replacing the "logout" text. 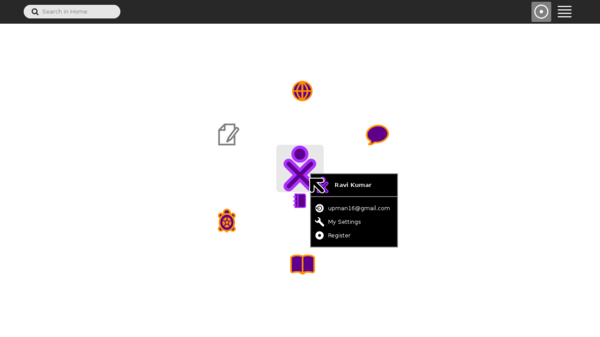 A learning Experience I had as a kid that I would like to describe is the classes of my Science teacher in the 3rd and 4th grade. He held a questions day weekly, where every student could come up with a question about the world around us. The entire week, we would nitpick trivial things around us and come up with questions such as 'Why do we sneeze?' or 'Why is the sky blue?' and the likes. Then he would answer every question patiently as each of us listened in rapt attention. This taught me that we listen to answers when we are interested in the question. Questions and answers together on a platter just isn't the right way to learn. It taught me that learning comes from curiosity and we can find it all around us - but we have to come up with the questions, rack our brains and finally be eager to find the right answer... that is when we truly learn something of value. I think I still remember exactly why we sneeze.

I would like to write a little bit about why I want to contribute to sugar in particular. Education, I think, still hasn't been modernized, we aren't making use of all the technologies we have at our disposal to make learning better and more effective. I also believe that education has to be free and accessible to everyone. I think Sugar does a great job towards this end and I want to be a little part of this effort to modernize education.