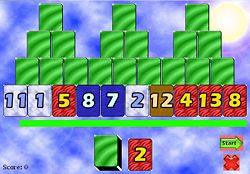 We have completed the initial proposed modifications to the game to make it applicable to 4th grade math education.

First download and extract the Etoys image zip file, next download the squeak executable from the squeak download page and place squeak.exe in the folder with the Etoys image file. Next download the game source file (.sar) - run squeak.exe, and drag and drop the .sar file into the Etoys window, selecting the "Install SAR" option. Click the "Make a Project" button to get to a blank screen, then press Alt+, to bring up the main menu and click 'new morph', go to from alphabetical list, D-F, and click on FtGame. The game is now loaded in the Etoys environment.

Using the browse program on the XO, simply download the XO game download from the link above and it automatically installs.

With the game loaded into the etoys environment on either the XO or PC, again hit Alt + , to bring up the main menu. Select the last option to "edit this menu". In the window that pops up, press the small browse button in the middle left to bring up the system browser. In the left column of the system browser, scroll down and select Funtowers-Game, in the other columns you can now select and browse all the game code.