1. The big news this week is Daniel Drake's announcement that OLPC has released V11.2.0 for the XO 1.0 and XO 1.5 hardware. This is a significant release in that it pulls in many of the newer Sugar features into an official OLPC build for the first time. Congratulations to Daniel and all of the contributors and testers who helped to get these bits released.

Details of new features, known issues, and how to download/install/upgrade can all be found in the release notes.

2. I spent last week in Argentina. I had a chance to get back to La Rioja and connect with the tech team there and we shared ideas about current and future plans for Sugar. (Alas, it was a holiday week, so I couldn't get to any schools in order to get direct feedback from teachers.) They are doing well, but are looking for more ways to make connections to teachers; we kicked around the idea of setting up Saturday clubs—a la Caacupe—to directly engage the kids in programming Etoys, Scratch, and Turtle Art.

3. While touring Argentina, I spoke with numerous ministries of education. In almost every conversation, we got around to discussing the acronym du jour, STEM (science, technology, engineering, and mathematics). Any program that hopes to find its way into classrooms—from Buenos Aires to Boston—needs to pay lip-service to STEM. While STEM is less debilitating than its predecessor, “21st Century Skills”, it is still very narrow in its scope and vision. But in the case of STEM I see an opportunity. If we add the Arts to STEM, we get STEAM. Now that could be hot!

4. There has been a discussion on Sugar-Devel about a pulse sensor built for Arduino. It was observed that using the microphone-input port on the XO would let one do something similar using Sugar. Guzman Trindad has built a simple sensor using an LED, a light sensor, and a clothespin to do exactly that. See his video using (of course) Turtle Blocks.

5. Congratulations to Uruguay, Paraguay, and Peru, the top three winners in the Copa America. Again there seems to be a high correlation between Sugar and success in international football. Also, congratulations to the Slipstream/Garmin/Cevelo cycling team on winning the Tour de France 2011. Slipstream is the pro team with which the Sugar Labs/Chipolte U23 team is also affiliated. 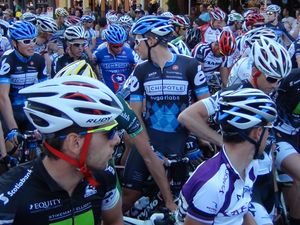 7. Raul Gutierrez Segales has been making headway on the "no Hippo" branch of Sugar and Sugar Toolkit. You can track the progress at

Gary Martin has generated a SOM from the past few weeks of discussion on the IAEP mailing list.