There are certainly cases where applying objective measures badly is worse than not applying them at all, and education may well be one of those. --Nate Silver

1. Not to be deterred by Nate Silver's words of warning, Claudia Urrea and I continue to work on mechanisms for visualizing learning Sugar. Along with the Pacita Pena and other members of the Learning Team, we have been designing rubrics that capture the level of fluency with the technology as well as the creative use of the individual Sugar tools by children. The rubrics are captured automatically in some Sugar activities, e.g., Turtle Art and a modified version of Write. We are aiming for evaluations that look more broadly than those data that are captured by standardized tests. We just submitted a paper, "Visualizing Learning with Turtle Art", in which we present some measurements calculated from 45 Turtle Art projects created by children working with Quirós Tanzi Foundation. 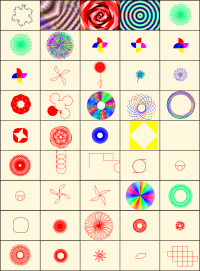 We claim that the rubric serves as a partial evaluation tool for open-ended projects. Partial, because it is only a measure of how the children used Turtle Art to express themselves, but not what they made or why they made it. But the rubric does have the potential to give some assistance to the teacher who is working within the context of accountability, without adding an additional burden of analysis above and beyond looking at the work itself.

We want children not just to learn about the computer, but also to learn with the computer. Providing activities such as Turtle Art that engage them in computational thinking in the context of personal expression is necessary, but not sufficient. Giving them tools for reflection enhance the learning experience. Giving their teachers simple-to-use mechanisms for assessment increase the odds that activities like Turtle Art will find more mainstream acceptance. Making it easier to assess open-ended projects lowers one of the barriers that are preventing more use of the arts in school.

2. Google Code-In ended last week. We had 52 contestants working on almost 200 tasks supported by 22 mentors. On February 4, Google will announce the two winners from Sugar Labs. But in the meantime, I want to thank everyone who participated and thank Google for this opportunity for outreach. Chris Leonard, the co-administrator from Sugar Labs, has made a page in the wiki summarizing the accomplishments of our students. Worth checking out.

3. Sean Daly, our PR guru, is back with a vengeance. We are planning to make some noise around Google Code In, the up-coming Sugar 1.0 release, and many other accomplishments in order to broaden our community of contributors and users. Please contact Sean if you have themes we should consider promoting.

4. Belated thanks to Luke Faraone for once again doing a great job running the Sugar Labs oversight board election.

5. I just released Turtle Blocks v170. It has a number of enhancements and bug fixes with help from the usual gang: Cynthia Solomon, Tony Forster, Alan Aguiar, Jeff Elkner, and Luke Faraone. Among other changes, the color model is improved: its three-dimensional nature is exposed more consistently and the color blocks, rather than just setting hue, set hue, shade, and gray, which eliminates some confusion caused by the black and white blocks. The other major change is a change from using a .ta suffix to a .tb suffix. (.ta files will still be recognized, but .tb makes more sense for Turtle Blocks and it makes the distinction between Turtle Art and Turtle Blocks more apparent.)

I added a few more sample projects, including an ambition project (640 blocks), game-trianglepaint.ta. The inspiration comes from a simple paint program that Brian Silverman wrote in Javascript and that Lionel Laske has packaged for Sugar. The Turtle Blocks version is not really usable as a paint program, but it does work and it exposes a lot of different ideas that will hopefully inspire some up and coming young hackers.

Finally, out of the blue, yet another third party Turtle Blocks plugin has appeared. The Logic plugin was written by Roman Pollak. It adds more bitwise operations to Turtle Blocks, such as AND, OR, XOR, NOT, logical shift left, logical shift right. Nice to see that people are using the plugin mechanism. We should consider generalizing it for all activities.

5. Tincho (Martin Abente) wrote with an update on the Sugar developer course he is teaching in Asuncion. You can follow the progress at CursoSugar2013. Tincho told a "funny story" that says a lot about the Sugar community and Free Software:

Today one of my students was really impressed by this 14ish years old hacker (Ignacio from Uruguay) wanting to help him with his assignment (look at Grupo 2 assignment). He said something like "I just can't believe it, where did he came from", he just could not believe someone (a kid) from another country contacted him just to help him, out of nowhere haha...

I wrote back to let him know that Ignacio is only 13!

6. Gerald Ardito was accepted to present his work developing the Regents Living Environment curriculum into a self-directed learning experience at a Educational Media conference in British Columbia this summer.

7. I am after-dinner speaker at the 25th anniversary of the Human Vision and Electronic Imaging Conference, a conference I used to frequent quite often, before I distracted by One Laptop per Child and Sugar. My topic will be the many ways in which human visual and electronic imaging influenced both the design of the XO and the Sugar user experience. Should be fun.

8. Cool visualization of the week. Anyone want to code this up?

9. Daniel Francis has been working on a tool to run Sugar Build on distributions that cannot be directly supported by Sugar Build by creating a virtual Ubuntu environment and building Sugar within it. Very cool.

10. Satellit (Thomas Gilliard) reported that we have an image built for Raspberry PI.