Boxes - Rectangles of any dimension

Circles - Circles of any radius

Triangles - Triangles (equilateral) of any size and initial rotation

Polygons - As many sides as you would like. Draw your own N-gon.

Grab - Drag existing objects around with the mouse Joint

Erase - Click on an object to erase it, or draw a line of destruction--erasing everything in its path! 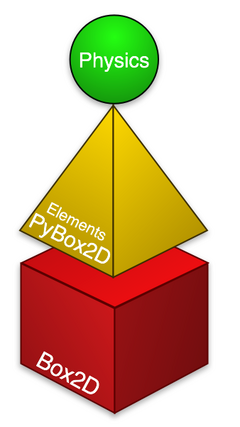 There are quite a few code layers to contend with, a normal Python Activity acts as a Sugar wrapper to Physics which is written using OLPCGames which wraps Pygame. Physics uses Elements as a wrapper for Box3D