Turtle Art, also known as Turtle Blocks, is an activity with a Logo-inspired graphical "turtle" that draws colorful art based on snap-together visual programming elements. Its "low floor" provides an easy entry point for beginners. It also has "high ceiling" programming, graphics, mathematics, and Computer Science features which will challenge the more adventurous student.

Where to get Turtle Art 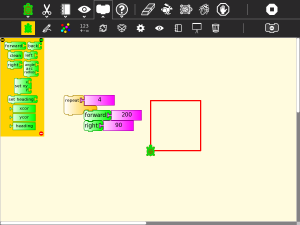 Start by clicking on (or dragging) blocks from the Turtle palette. Use multiple blocks to create drawings; as the turtle moves under your control, colorful lines are drawn.

You add blocks to your program by clicking on or dragging them from the palette to the main area. You can delete a block by dragging it back onto the palette. Click anywhere on a "stack" of blocks to start executing that stack or by clicking in the Rabbit (fast) , Turtle (slow) or Bug (debug) buttons

on the Project Toolbar.

Boxes, Stacks and the Heap

(aka variables, subroutines and the stack)

Note
The run buttons are tied to the Start Block. If no Start Block is used, then all blocks are run when either run button is clicked.

Note
The "rabbit" button runs the blocks at maximum speed. The "snail" button pauses and displays the turtle and block values between each step.

button, which is replaced by the Stop button on the main toolbar while the program is executing, is used to reveal the program blocks. Individual palettes can be hidden by clicking on their highlighted tab.

Note
On older Sugar systems, these controls appear on the Import/Export toolbar.
Note
To share a stack, click on the share button. The cursor will change to the hand shape

. Place the cursor on any block or stack of blocks and click. The blocks will be shared and the cursor will change back to the arrow shape.

The Edit toolbar is used to copy stacks of blocks to the clipboard and to paste stacks from the clipboard. To copy a stack, click on the copy button or type Ctrl-c. The cursor will change to the hand shape

. Place the cursor on any block or stack of blocks and click. The blocks will be copied to the Sugar clipboard and the cursor will change back to the arrow shape. To paste from the clipboard, type Ctrl-v or click the paste button.

Note
After save stack: To show the custom palette or see new stacks it is necessary to restart TurtleBlocks

The palette menus are revealed by clicking on the Block icon on the main toolbar. (On older Sugar systems, select the Projects toolbar. When running Turtle Art from GNOME, the palettes are visible by default.)

Note
Additional palettes may be loaded by plugin extensions to Turtle Blocks.

Note
A custom palette is created if you use the 'save stack' button on the Edit toolbar.

Note
Blocks are dragged from the palette onto the canvas surface. To dispose of a block, drag it back onto the palette. (It will be placed onto the trash palette.)

Note
The palettes can be displayed horizontally or vertically (See below). Orientation is adjusted by clicking on the

buttons on the upper-left corner of the palette.

Note
The palette can be hidden by clicking on the

button on the lower-right corner of the palette.

button on the upper-right corner of the palette.

Note
On smaller screens, a palette may not fit. It can be scrolled by clicking on the

These blocks are used to control the movements of the turtle.

These blocks are used to control the attributes of the turtle's pen.

These blocks can be used with the set-pen-color block in place of a number block.

These blocks are arithmetic and boolean operators.

Note: Nesting while and/or until blocks is not always reliable. If you encounter an error, try putting the nested block in a separate stack, accessed with an action block.

These blocks are for defining variables and subroutines. Without actions

Note: When a named action or named box block are used, new blocks appear on the palette that correspond to these names; e.g., if a top of action stack is rename, "to square", an action block, "to square" is added to the palette.

Palette with additional actions and boxes created by the user.

The OLPC XO can measure external inputs with its microphone jack:

These are a collection of blocks used for displaying media objects, such as images from the Journal.

These are a collection of extra blocks for accessing advanced features only available in Turtle Blocks.

add your own math equation in the block, e.g., sin(x); This block is expandable to support up to three variables, e.g. f(x,y,z)

These blocks are used to make multimedia presentations only available in Turtle Blocks.

Only available in Turtle Blocks:

Note: The slide blocks expand into stacks that can be edited for customized presentations.

The custom palette holds any blocks that have been saved with "Save Stack" option in Edit Toolbar. It lets you reuse stacks between projects. Blocks on this palette will expand into action stacks.

Note
This palette first appears after using the "Save stack" option on the Edit Toolbar.

This palette holds any blocks that have been put in the trash. You can drag blocks out of the trash to restore them. The trash palette is emptied when you quit Turtle Art.

Tony Forster and User:Mokurai have created a number of Activities/Turtle Art/Tutorials Turtle Art Tutorials on a wide range of math, programming, art, and Computer Science topics. There is also a substantial literature of educational materials using the Logo programming language, from which Turtle Art and Turtle Blocks derive. The Exploring with Logo series from MIT Press is particularly recommended for showing how far beyond simple graphics Logo can go. Mokurai recommends starting with his first three, specifically designed for helping beginners of all ages, starting with the preliterate in preschool.

There are versions of Turtle Art in several programming languages and environments, including Logo, Python, Smalltalk, and others. Turtle Art can export programs in Logo, as explained below. There are programmable blocks in Turtle Art which make it possible to include any Python program within the Turtle Art world. The simplest case is a single function call used in a graphing program, but there is no inherent limit on what capabilities of Python one can add to TA.

Turtle Art can export its projects to Berkeley Logo (using either View Source or the Save as Logo button on the Project Toolbar) You can download the Berkeley Logo activity here.

Logo code generated from your project is viewable in the View Source panel in some versions of Turtle Art, but as of v100, the Turtle Art project itself is shown instead.

Note: The Save-as-Logo button saves to the Journal as "logosession.lg". UCB Logo does not yet access the Journal directly, so it is necessary to copy the project out of the Journal using the "copy-from-journal" command in the Terminal Activity and then accessing the project using the File menu within the UCB Logo Activity.

Alternatively, you can open the logosession in 'Write', copy the Logo code to the clipboard, and then paste it into the UCB Logo Activity.

There are two ways to create Python blocks: by loading sample code provided with Turtle Art or by loading Python code the your Journal.

A number of individual sample programs are provided. Clicking on the Load Python Block button on the Load/Save Toolbar

will invoke a file-selector dialog. Select the sample that you want and it will be both copied to the Journal and loaded into a Python block. 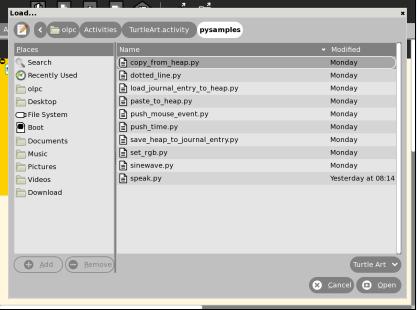 Clicking on a Python block

that has been dragged onto the canvas from the Extras palette will invoke an object-selector dialog. 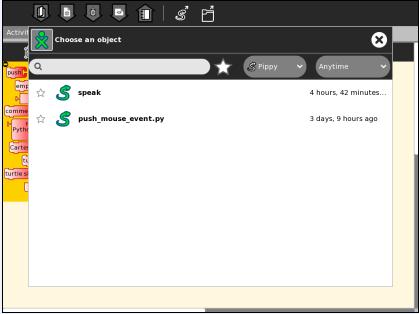 Select the Python code that that you want and that code will be loaded into the selected block.

You can't run a Python block by clicking on it, as that opens the object selector; instead attach the block to another one and click elsewhere on the stack you have created.

Which ever way you create them, multiple Python blocks can have different code loaded in them.

Turtle Art is under the MIT license. You are free to use it and learn with it. You are also encourage to modify it to suit your needs or just for a further opportunity to learn.

Much of the motivation behind the Version 83 refactoring of the code was to make it easier for you to make changes. Most changes can be confined to two modules: taconstants.py and talogo.py. The former defines the blocks and palettes; the latter defines what code is executed by a block.

Note: As of Version 106, there is also support for plugins. If you can use the plugin mechanism to add support for additional devices, e.g., Arduino, or for making modifications such as are described below without making changes to the standard code base. (The advantage to the latter is that your changes will remain intact even after you upgrade to a newer version.)

The tabasics.py file contains the constants that by-in-large determine the behavior of Turtle Art. Notably, the block palettes are defined below. If you want to add a new block to Turtle Art, you could simply add a block of code to that file or to turtle_block_plugin.py, which contains additional blocks. (Even better, write your own plugin!!)

Next, you need to define what your block will do. def_prim takes 3 arguments: the primitive name, the number of arguments—0 in this case—and the function to call—in this case, the canvas.seth function to set the heading.

Where to report problems