Turtle Blocks 3D is an extension of Turtle Blocks into three dimensions. In addition to moving the turtle on a plane, the turtle can be moved in a three-dimensional Cartesian space.

All of the features from Turtle Blocks 2D are present in this version, along with some new ones.

This activity runs in Sugar and also in the GNOME desktop. To run it from GNOME, you will need to clone the repository and then run the executable turtleblocks-3d.py. 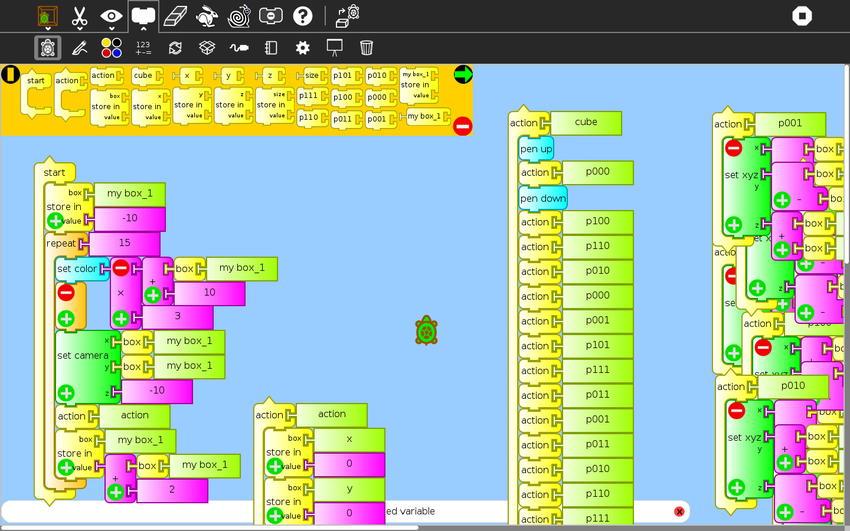 The source code is available here.

In this section you will find the description of those toolbar items that are unique features of the 3D version of Turtle Blocks. For information about other toolbar items, please refer to Turtle Blocks wiki page.

You can save the 3D objects you create in TurtleBlocks3D as .obj files and you can load .obj files generated from other programs, such as Blender.

Save as wavefront .obj
Use this button to export 3D graphics to '.obj' format. We currently support points, lines, polygons, and color. 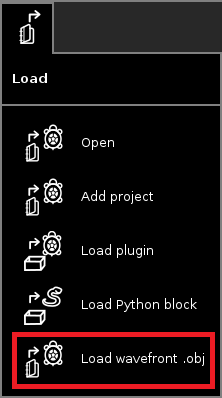 Load wavefront.obj
Use this button to import 3D graphics from the .obj file format (used by many 3D modeling tools). When you click the button, a "Choose an object" dialog pops up; from there, select an .obj file from the Sugar Journal or the filesystem.

It is 3D, So you can also choose where to look from, With the Camera-position option you can choose top, front, left, right, top-left and top-right camera positions!

These blocks are used to control the movements of the turtle.

Items marked with * are the options that only exist in Turtle Blocks 3D.

Support for this activity is provided by the developer at walter@sugarlabs.org