From Sugar Labs
< 0.84(Redirected from DevelopmentTeam/Release/Releases/Sucrose/0.84)
Jump to navigation Jump to search

Sucrose 0.84 is the latest version of the Sugar education platform, consisting of Glucose, the base system environment; and Fructose, a set of demonstration activities.

Sucrose is released every six months and contains many new features, improvements, bug fixes, and translations. Sucrose 0.84 continues this tradition and is our second well-planned release to date.

You can learn more about Sugar itself by studying the Sugar definition or by reading the comic strip about the learning platform from Dongyun Lee.

In order to make it easier to continue past work, the Home View will display recent activity entries in the activity Palette. 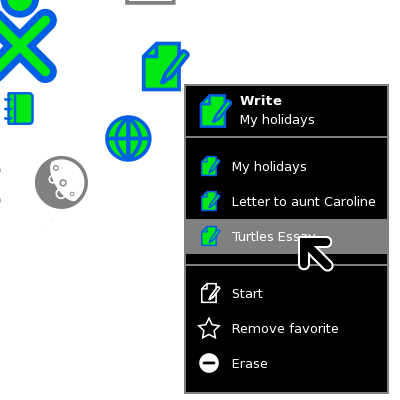 You can choose to resume past entries or, with the Start option in the Palette, start a new instance of the activity. 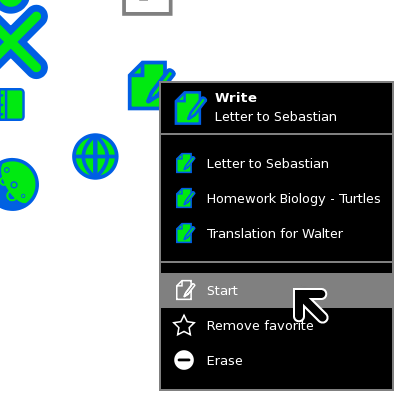 When clicking on the activity icon in the Favorites View, the last entry will be resumed by default. This is based on the assumption, that in most cases, one want to resume previous work rather than creating from scratch.

There were some great improvements to the View Source concept in this release cycle. You can display the source code of an activity using the activity Palette in the Frame or by using the keyboard short cut Shift+Alt+V when in an activity. 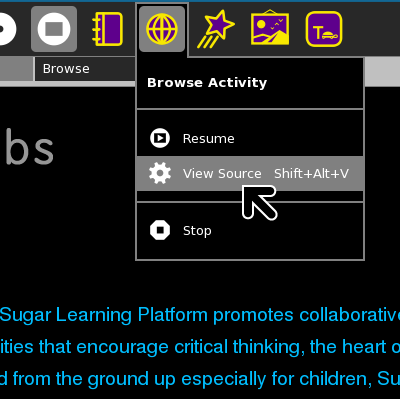 The View Source dialog will allow you to examine the content of the activity bundle and display its files respectively. 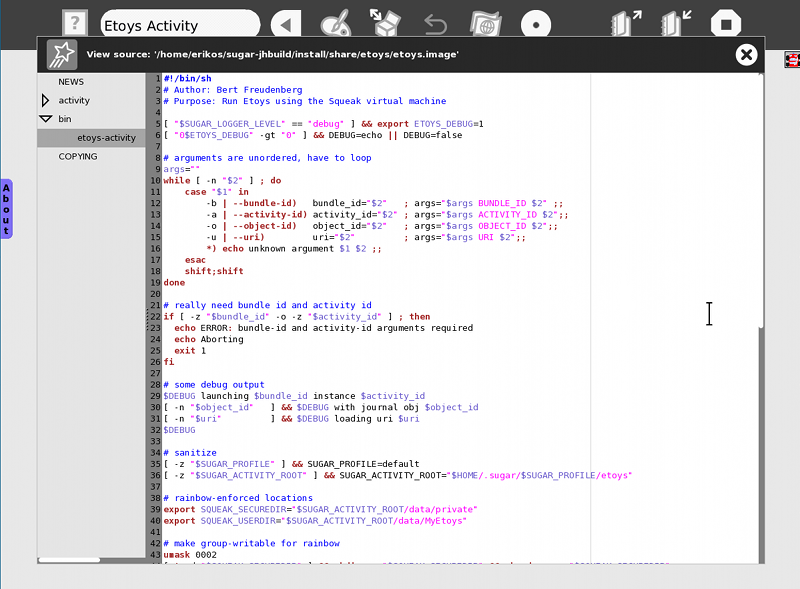 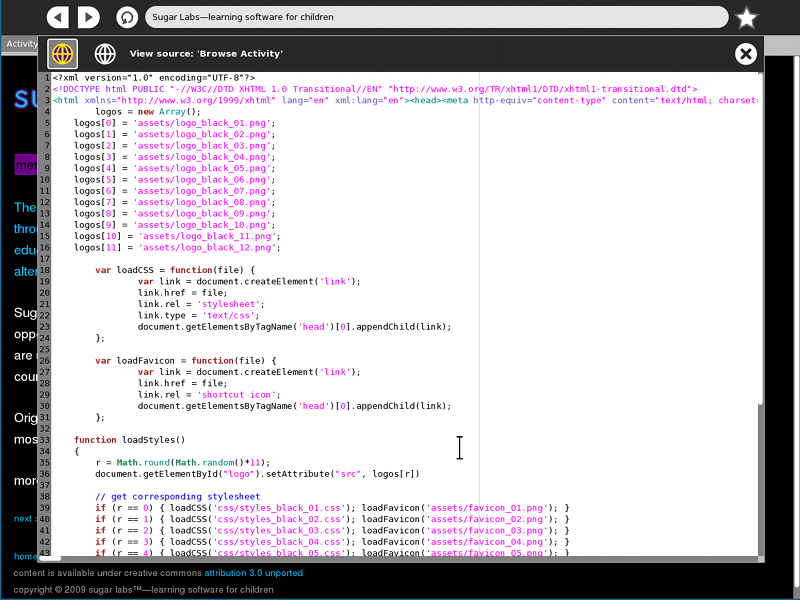 Using the uncoloured outline to represent the bundle vs the coloured icon to represent an instance has been the design cue all along.

A lot of work has gone into bringing the Journal implementation closer to its design. The Object Chooser can now be filtered by data type, which improves the experience in activities like Write that can fetch content from the journal, e.g. images. 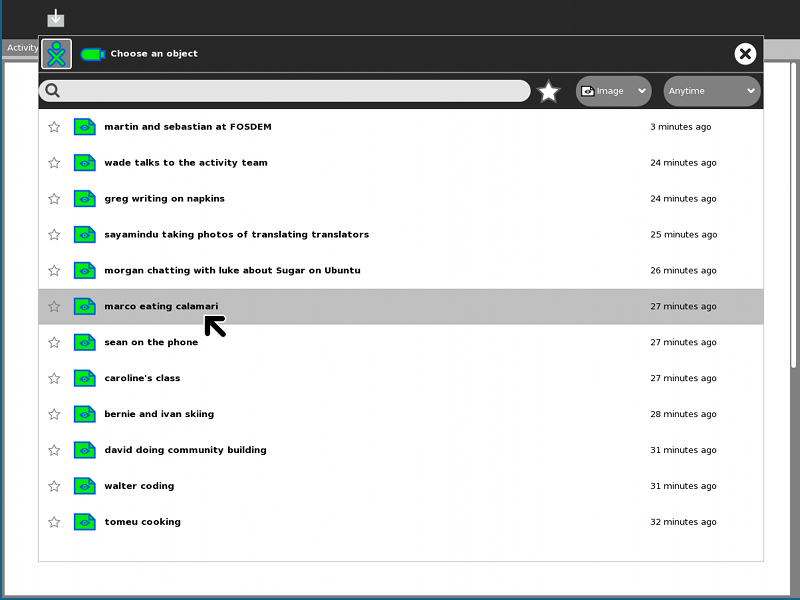 A button has been added to the toolbar to filter for favorite entries to give a better way of marking entries as 'important'. 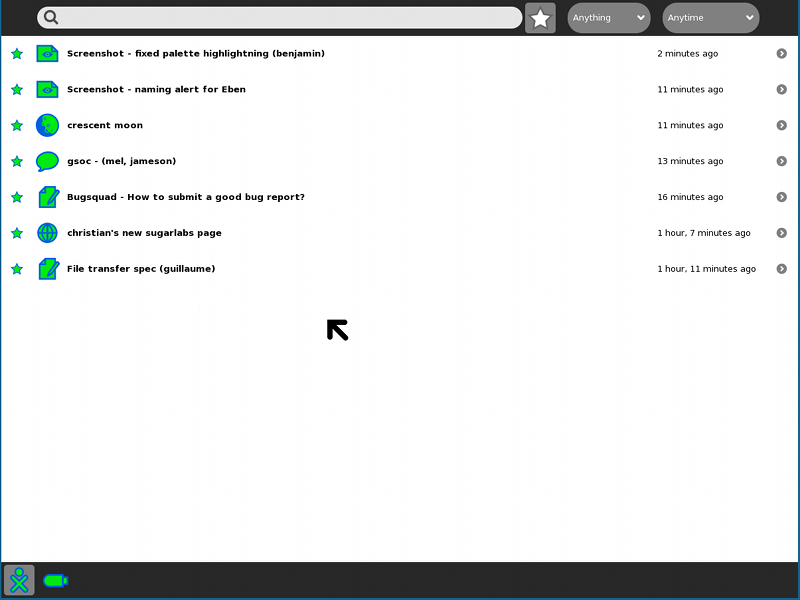 The Journal entry Palette shown in the list view has seen some great improvements. We added a View Details option that brings you to the details of the entry. Furthermore you do not need to go to the detail view any more to select the activity you want to start or resume the entry with - this option is now available in the Palette as well. 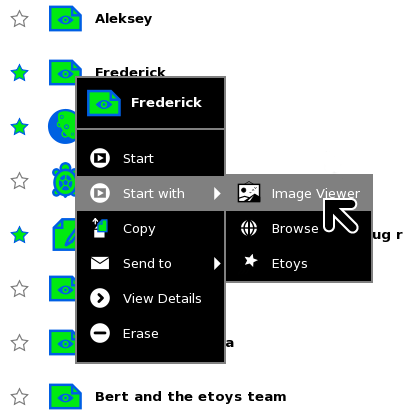 The Journal's search and browsing capabilities are less useful if all entries are named the same regardless of their actual content or meaning to the user. That is why an alert has been added that encourages the user to set the title and other properties of a newly created Journal entry. This alert is only shown on the creation of a new Journal entry, not on resume. 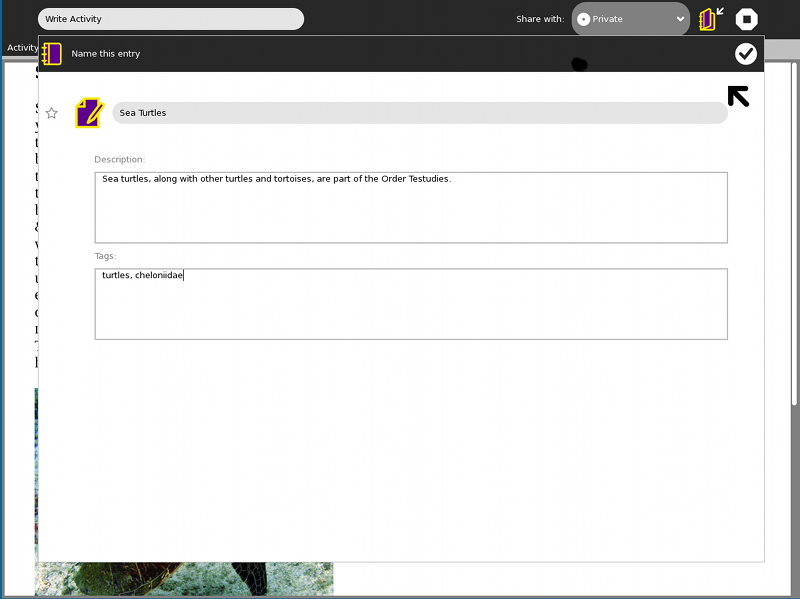 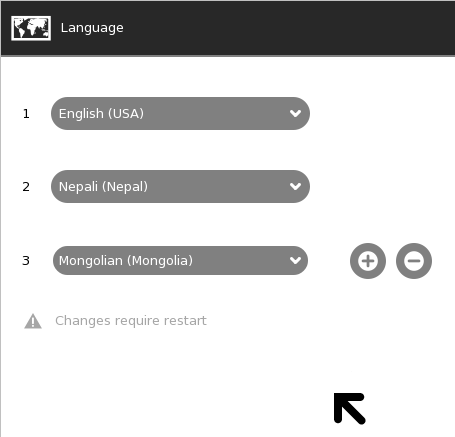 The About my XO section has been renamed to About my Computer to reflect the use of Sugar on non-XO hardware. As well the fields of the page has been changed accordingly. The Power Section is only displayed on XO hardware since the functionality is currently only available there.

Furthermore you can change the jabber server without having to restart Sugar.

For text clippings a preview is displayed so it's easier to spot the wanted clipping. 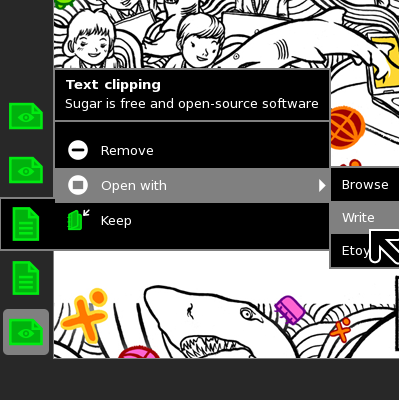 Several improvements were made to the detection of images dragged and dropped to the clipboard in the Frame.

New logic for the device positions

The logic to position the Frame devices has been reworked. Plug in your devices and try it out.

A logout option has been added to the XO menu. It is displayed in cases where we have a multi user system and allows therefore returning to a Login Manager like KDM or GDM. The menu is now accessible as well from the Groups and Mesh View and the Friends Tray. 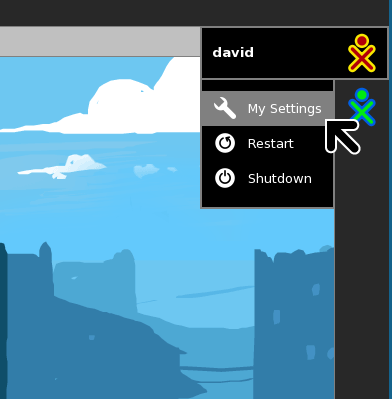 Some basic file exchanging functionality has been added, with plans to expand it in the next release. You will be able to interchange files from the Journal to other computers running Sugar if they are on the same local network and are not connected to a Jabber server (check the Network Section in the Control Panel). 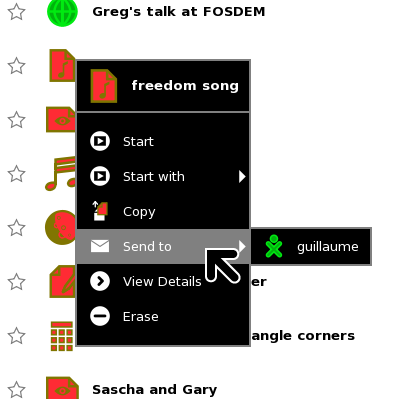 On the receiver side an entry for an incoming transfer will be added to the Frame. You can then choose whether accept or decline that transfer. 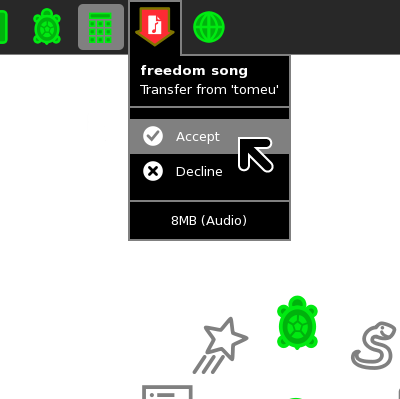 On the receiver side an entry for an outgoing transfer will be added to the Frame. The sender can cancel that transfer at any time. 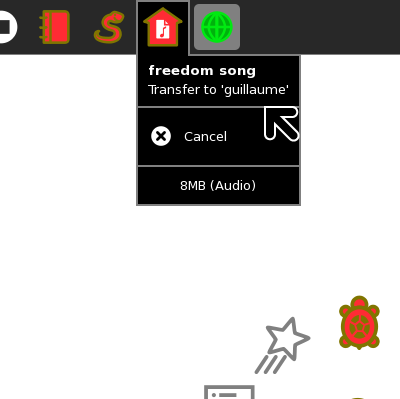 The Palette highlighting on tray icons has been fixed. 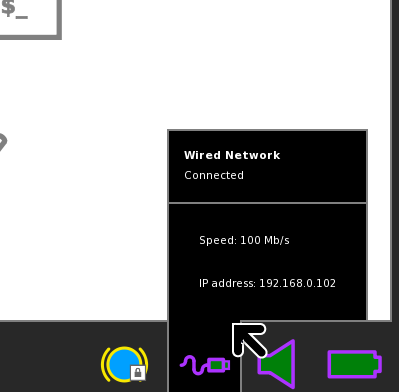 The direct access on right click has been added to many places - for example the AP icons in the mesh view or the device icons in the frame.

Three great activities have been added to Fructose, the Image Viewer activity, Turtle Art and Jukebox.

The following changes are important for developers using the Sucrose 0.84 developer platform. If you're not interested in changes for developers, you can skip forward to Section Internationalization and Localization.

A widget to select the color has been introduced. It is similar to the gtk.ColorButton, but does not have any alpha support. Instead of a color selector dialog it will pop up a Palette. An example on how to use the ColorToolButton in your activity can be examined in the Write activity.

The Object Chooser can now be filtered by data type. An example is the import image functionality in Write.

Support for accelerators has been added to the MenuItem widget. The sub classed hippo.CanvasWidget, CanvasTextView has been moved to the toolkit.

An API policy has been figured out and modules have been marked as STABLE / UNSTABLE / DEPRECATED. There is a comment in the module that indicates its current state.

Sugar moved to GConf as a backend to store the profile. This is another step in reducing divergence from other desktop environments.

To handle "view source", HandleViewSource and GetDocumentPath have been added to the activity service. The former will handle the content of the activity bundle, the latter is the source of the current activity instance, in the case of Browse this would be the source of the HTML page currently displayed. Activity authors need to implement get_document_path and return the path to the document the dialog should display.

The method get_preview has been changed to be public. It does return an image representing the state of the activity. Generally this is what the user is seeing in this moment. Activities can override this method and provide their own preview data.

For performance reasons Sugar is using exclusively cjson, a JSON processing module written in C. Pyjson and Simplejson have been dropped. All the Fructose activities that use JSON to serialize data have been changed to use cjson as well.

Etoys 4.0 has been released. The major version jump signifies the end of their two-year relicensing effort. Now we are looking forward to see etoys packaged for distributions that the Sugar users can enjoy that great educational environment there as well. Big Thanks to the Squeak community and Etoys developers!

Bundlebuilder the module for packaging xo bundles, bundling source tarballs and installing activities on the system has been refactored, mainly to do a more standard system installation of activities. The install argument has a prefix option, mo files are installed in '/usr/share/locale' and po files are not installed. The release command has been dropped. For Glucose and Fructose components you can use the release script of the sugar-tools module instead.

Extending the shell was never that easy. For example you can extend the Control Panel by adding a new section, adding a new device to the Frame, or defining a new keyboard shortcut. You only need to put your Python code, following the API guidelines, at a certain place and the extension is picked up by the shell on startup automatically.

The API is unstable for the moment and will be reviewed in the next release cycle. Nevertheless, people have been writing little widgets, like a clock, for the Frame already.

Have a look at existing extension code here.

Since version 0.84 the configuration file '~/.sugar/debug' is created which gets read when Sugar starts. The file does contain logging options which are commented by default. Use your editor of choice and remove the '#' before the line 'export SUGAR_LOGGER_LEVEL=debug' to enable Sugar debug logging. More information about the Sugar logs can be found at BugSquad/Get Logs.

What is new for packagers

Thanks to members of the worldwide translation team, who can be found on the localization mailing list, we have the following languages (listed alphabetically) which have significant support (more than 80% of the user interface translated):

Moreover, a number of languages have attained "partially supported" status, with more than half of the user interface strings translated.

When you upgrade a computer that was running previously Sucrose 0.82,

If you later downgrade from Sucrose 0.84.x to an earlier version,

You can browse the notes of each development release in Development Team/Release/Roadmap/0.84#Schedule. Their respective sources are listed there as well.

Planning of the next release cycle has started at Development Team/Release/Roadmap/0.86.