From Sugar Labs
< 0.88
Jump to navigation Jump to search

The new shining version of the sweet learning environment is available. Many people from all over the world have been working together over the last six months to make this tooth breaker possible. 0.88 is the latest version of Sugar, consisting of Glucose, the base system environment; and Fructose, a set of demonstration activities. This new release contains many new features, performance and code improvements, bug fixes, and translations.

You can learn more about Sugar itself by studying the Sugar definition or by reading the comic strip about the learning platform from Dongyun Lee. Even better, why not try Sugar today?

Connect to the Internet using a GSM modem

You can use a GSM modem with Sugar to connect to the Internet. GSM modems are often found in mobile phones but there are also standalone modems that can be connected over USB to a computer. When a GSM modem is attached to the computer, a device is added to the Sugar Frame from which you can connect to the Internet. The settings for the connection—such as service provider and password—can be configured from the Sugar Control Panel. This feature provides Sugar learners with more ways to access the Internet.

Developers and educators from Plan Ceibal and Paraguay Educa worked together to add the GSM feature to Sugar. Thanks to Tomeu Vizoso for introducing the new upstream contributors to the development process. 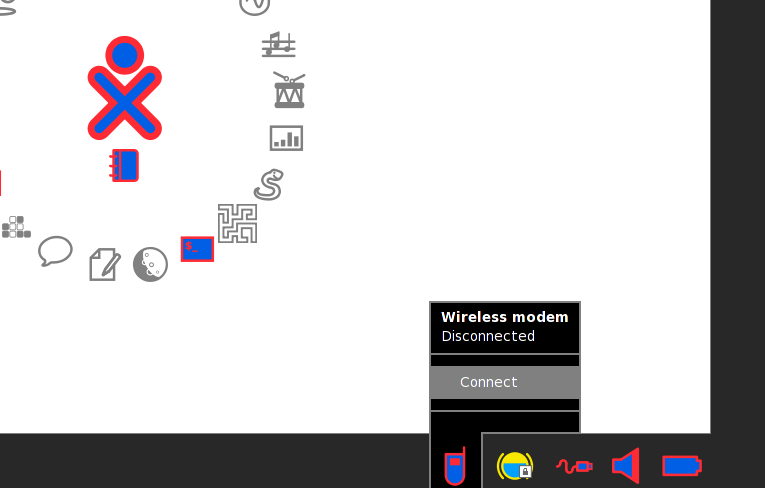 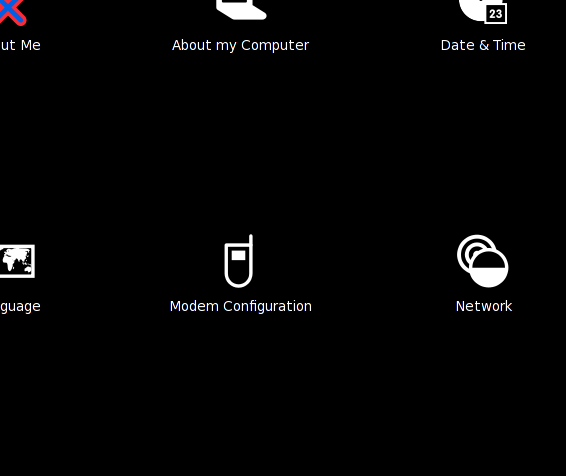 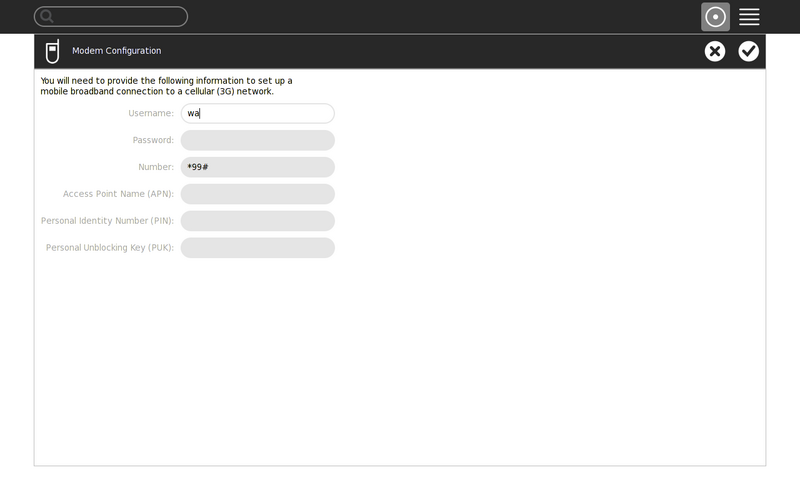 The Control Panel section to set the connection settings. 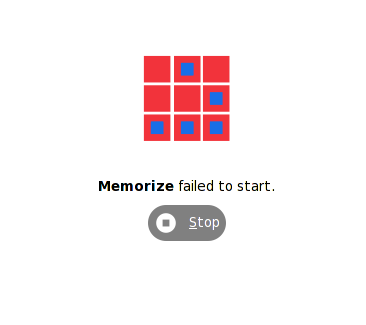 A message is displayed when an activity fails to start.

Thanks to Wade Brainerd and Aleksey Lim for developing this enhancement which is a great start to make developing inside of Sugar more pleasant and which provides better feedback in the activity starting period.

Turtle Art has undergone a major rewrite for this release. Many new features have found their way into this release including cartesian and polar coordinate grids, support for multiple turtles, resizable blocks, SVG export, and run-time block highlighting.

Turtle Art is a great example of an activity that has been going through several development iterations over the past years and have seen many improvements based on feedback from the field. Thanks to Brian Silverman for starting this success story and the leading force behind the Turtle Art development and Turtle Art community coordinator Walter Bender.

The Squeakland website now has a showcase section where Etoys users from all over the world can share their projects. There are many excellent projects already!

The new Etoys version in Sugar 0.88 supports direct publishing from within the activity. To publish a project to the showcase, you need to hold down the "Keep" button and choose "publish" from the little menu. 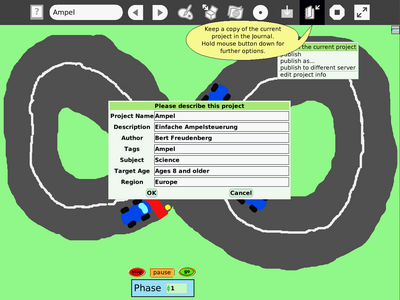 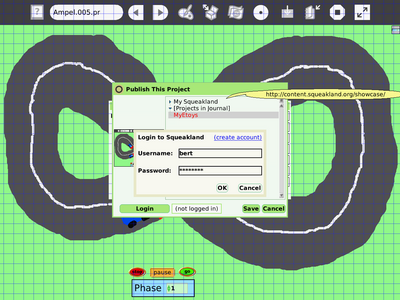 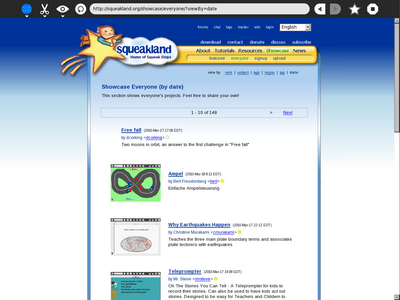 When approved, the project is listed in the showcase

Other improvements in this new Etoys version include:

We want to thank the Etoys and Squeak community who have been contributors since the first Sugar days, and especially Bert Freudenberg who is coordinating these efforts.

An enhancement has been added to Sugar that tracks the most recent choice when opening an object with an activity. A little example should help to outline the new behavior:

Thanks to Aleksey Lim for developing this nice enhancement to an every day workflow.

Synchronize changes made to a Journal entry

A long-standing issue with synchronizing changes made to a Journal—originally reported in Sugar 0.84 as described in ticket #1358—has been fixed. Edits to a Journal entry (e.g. changing the entry name or the description) while an activity is still open were lost when the activity was closed. The patch has also been backported to Sugar 0.84.

Thanks to the team of the Planetarium Sugar Pilot for fixing this bug.

We have recently surpassed 2.5-million Sugar Activity downloads! There are hundreds of activities available for download in a variety of categories!

Thanks to all the activity maintainers and developers for making this happen.

What is new for distributors and deployers

This Feature adds the possibility for distributors and deployers to customize the Sugar font size. The proposed solution is one similar to the solutions used in other desktop environments like GNOME and KDE: allow customization of the base font size used across the entire desktop platform. This is another important step to bring Sugar more in-line with the desktop world and distributors like OLPC will be able to select font sizes without ugly hacks. The size of the Sugar font can be set using the GConf key /schemas/desktop/sugar/font/default_size which is set to 10 by default. The Font face can be set using the GConf key /schemas/desktop/sugar/font/default_face which is set to Sans Serif by default. In Sugar 0.90 there will be a new control panel section that users will be able to customize the font size to suit their needs, too.

Thanks to Daniel Drake for developing this Feature which is a huge improvement for customizing Sugar.

In general the translation process is tightly coupled with the release workflow. In order to get the latest translations for a particular activity, deployments need either to wait for the activity maintainer to provide a new release or to use the language-pack mechanism, which is distribution specific (and at its best an ugly hack). The Enhanced Gettext Feature adds an extra search path for the translation files of Sugar activities. This allows deployments to add and update activity translations independently of the release process. The alternate search path can be configured using the GConf configuration system. The GConf key is /schemas/desktop/sugar/i18n/langpackdir which is unset by default.

With this feature it should be easier for deployments who rely on a small translator team to accomplish their job since they no longer need to keep pace with the Sugar release cycle. Furthermore, we hope to alleviate activity maintainers from the burden of making a new release whenever a new translation becomes available.

Thanks to Sayamindu Dasgupta for his ongoing efforts to make the life of the translators easier!

An option has been added to enable the "enter your name" screen which is displayed when you use Sugar for the first time. The screen is only needed in live environments e.g. Sugar on a Stick. If Sugar is ran in an installed to disk environment, the user will need to provide a name and password to start the session, so asking for a name again is not needed. In those cases Sugar will use the name provided by the existing UNIX account. The name input screen can be disabled using the GConf configuration system. The GConf key is /schemas/desktop/sugar/user/default_nick, the screen is disabled by default and will use the UNIX account name. Set the key to disabled to display the screen on Sugar startup.

Thanks to Aleksey Lim for developing this enhancement.

The following changes are important for developers using the Sucrose 0.88 developer platform.

No new widgets have been added to the toolkit in the 0.88 development cycle.

The datastore API has been cleaned up. The dbus_helpers have been killed and all the functionality has been moved to one module datastore. There has been an extensive effort to complete the documentation from this module, too. Furthermore the toolkit has been seen another round of cleanups using pylint and to convey the PEP 8 Style Guide.

There are still many activities that do not use the new activity toolbars introduced in 0.86. We encourage the switch to use the new toolbars as there have been huge improvements in usability (e.g. stopping an activity).

Jim Simmons has written a guide to writing Sugar Activities (Please see Make your own Sugar Activities!) which details how to convert your activity to the new toolbars without compromising performance on old Sugar systems.

More than 80% of the core sugar user interface and toolkit has been translated to 23 languages, which are (in order of percent translated):

This work has been made possible thanks to the tireless efforts of the members of the translation team.

Migrating the datastore from learners using Sugar 0.82 was broken in 0.86. A fix has been going into 0.88 to successfully migrate the datastore. There a no known compatibility issues, as of today.

Update to this version

Please use the instructions for your distribution (SoaS, Fedora, Ubuntu, Debian etc) of choice to upgrade to this release. Note that it may take a while until the release is packaged for each distribution. Please stay tuned for distribution specific announcements and watch out for updates at Get Sugar.

You can browse the notes of each development release in 0.114. Their respective sources are listed there as well.

Planning of the next release cycle has started at 0.90/Roadmap. One of the most interesting goals is the refactoring of Collaboration on which Tomeu Vizoso and the Collabora team are working on. Furthermore we hope to finally land Sascha Silbe's work on versions in the datastore and the Features that missed the 0.88 release.